The small EVEREST trial has shown that the concept of guiding cetuximab dose escalation using the clinical parameter of acneiform skin rash is safe. However, as no significant increase of cetuximab efficacy could be observed, data from the ongoing EVEREST II trial must be awaited before dose escalation can be considered for clinical use.

This article was first published online in Nature Reviews Clinical Oncology vol. 9 no. 10, and is published with permission. © 2012 Nature Publishing Group. doi:10.1038/nrclinonc.2012.142

Skin toxicity in patients receiving cetuximab is positively associated with clinical outcome. The EVEREST study was conducted to examine the pharmacodynamics, pharmacokinetics, pharmacogenetics and safety of cetuximab dose escalation in a phase I/II setting in patients with metastatic colorectal cancer.[1] The study specifically investigated whether higher cetuximab doses would lead to a higher occurrence of grade 2 or 3 acneiform rash and superior treatment efficacy. In this study, 89 patients with or without minor (Common Terminology Criteria for Adverse Events [CTCAE] grade 0 or 1) acneiform skin rash after 21 days of receiving the standard dose of cetuximab (250 mg/m² per week after initial 400 mg/m²) were randomly assigned to receive either escalated cetuximab doses of up to 500mg/m² per week or to continue with standard dosing. Patients showing grade ≥2 skin toxicity (n=77) continued standard cetuximab dosing until progression and served as a control group. As with the BOND study,2 patients were eligible to enrol after irinotecan failure and were administered irinotecan (180 mg/m² every other week) as the chemotherapeutic backbone. The published data of EVEREST[1] focus on the pharmacokinetic parameters, toxicity analyses and efficacy of the different treatment arms.

As expected, cetuximab serum concentrations rose under the influence of increased cetuximab administration. In terms of toxicity, there was no obvious difference in haematological adverse events between patients receiving the standard dose and those receiving the elevated regimen. Considering the non-haematological events associated with therapy, the proportion of patients developing hypomagnesaemia rose, and grade ≥2 cetuximab-related skin toxicities occurred at higher frequencies in the dose-escalated cohort, as predicted. In addition, the authors report efficacy data (objective response rate [ORR], progression-free survival and overall survival) with no significant differences between the different treatment groups. However, a trend towards higher ORR (30% vs 43%) and disease control rate (70% vs 83%) was seen in the dose-escalated group.

Acneiform skin toxicity is a class effect of all EGFR-targeting drugs currently in clinical use, including erlotinib for pancreatic and lung cancers and cetuximab and panitumumab for the treatment of metastatic colorectal and head-and-neck cancers.[2–4] Retrospective analyses have shown a correlation between the grade of acneiform rash and the efficacy of anti-EGFR therapy – irrespective of the drug, underlying disease or whether the drug is given in combination with radiotherapy. For example, in colorectal cancer, the grade of acneiform rash is directly associated with the length of the observed survival.[5] In trials that investigated the efficacy of EGFR-targeting drugs in combination with chemotherapy, patients with colo-rectal cancer who did not experience any skin toxicity from the EGFR therapy had shorter survival periods than patients treated with chemotherapy alone. This correlation between rash and survival has been shown for erlotinib,[3] cetuximab and panitumumab.[4,5] However, the trials each showed an overall survival benefit for EGFR-targeting agents with chemotherapy over the chemotherapy alone arms, irrespective of skin rash. These benefits were significant for erlotinib in pancreatic cancer (P=0.03; HR 0.81)[3] and had a trend to significance in cetuximab (P=0.48; HR 0.91)4 and panitumumab (P=0.072; HR 0.83).[5] Several host-related factors have been proposed to be predictive of the development of acneiform rash. Aside from the fact that younger male patients (<65 years) are more likely to develop acneiform rash,[3] molecular factors such as the single-sequence CA repeat intron-1 polymorphism of the EGFR also predict the likelihood of acneiform rash.

Acneiform rash is attributed to the direct inhibition of EGFR expressed in undifferentiated proliferating keratinocytes in the basal and suprabasal layers of the epidermis and outer layers of the hair follicle. This inhibition leads to premature keratinocyte differentiation and increased cell–cell attachment as well as reduced growth and migration, which collectively disrupt the formation of a normal, protective epidermal barrier. Indeed, Fracasso and colleagues revealed that elevated serum concentrations of cetuximab in patients receiving escalated cetuximab doses (with a maximum serum level reached at doses of 400 mg/m² per week) were accompanied by reduced EGFR protein expression in the skin compared with patients receiving the standard dose.[6] This decrease was already evident at a cetuximab dose of 250 mg/m² per week and there was a trend to even lower levels of EGFR expression in the 400 mg/m² cohort.[6] A separate study that focused on saturation of the EGFR with cetuximab in patients with head-and-neck tumours who were treated with cetuximab showed that EGFR saturation within the tumour was dose dependent; an initial cetuximab loading dose of 400 mg/m² followed by 250 mg/m² weekly achieved almost complete saturation of EGFR in the tumour tissue.[7] These data suggest that the acneiform rash reflects the saturation of EGFR in the tumour. Furthermore, the study demonstrated that a small number of patients might benefit from 400 mg/m² per week cetuximab in terms of downregulating EGFR in the skin – resulting in acneiform rash – and maximising EGFR saturation by cetuximab in the tumour.

An inflammatory response – including increased production of cytokines such granulocyte-macrophage colony-stimulating factor and recruitment of inflammatory cells – also contributes to the development of the characteristic rash.[8] This inflammatory response suggests that EGFR inhibition increases the recruitment of inflammatory cells involved in the immune response against the tumour. Such an immune reaction might further explain the correlation between the occurrence of acneiform rash and a superior outcome, which is observed irrespective of KRAS mutational status.[4] Although a correlation between acneiform grade and the inflammatory response inside the tumour in the presence of cetuximab therapy has not been shown, Tabernero and colleagues have demonstrated that downregulation of proteins downstream of EGFR – such as phosphorylated EGFR and phosphorylated MAPK – and upregulation of STAT3 (signal transducer and activator of transcription 3 protein) in the skin do occur in tumours treated with cetuximab in a dose-dependent manner.[9] 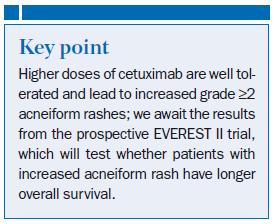 The efficacy of anti-EGFR drugs is also influenced by the presence of genetic alterations, which inhibit downstream pathway signalling. In colorectal cancer, in addition to KRAS codon 12 and 13 mutations, NRAS, BRAF (V600E), PI3KCA and AKT1 (E17K) mutations as well as expression of PTEN are associated with resistance to cetuximab. Furthermore, EGFR mutations and KRAS amplification were also noted to be associated with cetuximab resistance.[10] If the mechanism by which tumours are resistant to cetuximab therapy was inherited, dose escalation would not likely show benefit. However, patients without the genetic mutations that confer inherited resistance, and whose tumours do not show complete EGFR saturation when receiving standard doses of cetuximab, might benefit from escalated cetuximab doses. Those higher doses might further downregulate EGFR expression in the skin and, therefore, the patients might develop a higher grade of acneiform rash.

As almost 90% of patients treated with cetuximab display some grade of acneiform rash, the therapeutic window of cetuximab dose escalation might be narrow. Although the small size of the EVEREST trial limits the conclusions we can draw, these preliminary data warrant further studies. We await the data of the prospective EVEREST II trial before we can consider the clinical implications of the concept of escalating cetuximab guided by the clinical parameter of acneiform rash.