Cancer genetics is intriguing, exciting and offers hope for real progress in treatment, but try telling that to non-scientists. Clive Cookson, science editor at the Financial Times, did just that. His article, explaining the evolutionary process that drives cancer, won him a Best Cancer Reporter Award

Cancer scientists have a new patron saint: Charles Darwin. Research is showing that the only way to cure cancer in its many forms will be to understand the Darwinian evolution that drives the disease within each patient, as natural selection works on genetic mutations within tumour cells.

Knowledge of cancer is advancing more rapidly than any other field of medical science, because cancer is a disorder of DNA – and now, with the coming of new technology to read the mutations in individual tumours, researchers can find out for the first time what is really going on.

The outcome, say researchers, will be a new generation of tests and personalised treatments aimed at the particular changes taking place in each tumour. Many cancers will be treated in a similar way to infections by a fast-evolving virus such as HIV, where drug combinations can keep the emergence of resistance in check.

“Today, despite the best efforts of the drug companies, we still use medieval methods to attack most cancers: cutting [surgery], burning [radiotherapy] and poisoning [non-specific chemotherapy],” says Alan Ashworth, head of the Institute of Cancer Research in London. “Once we understand the Darwinian process by which cancer cells evolve in the body, we should be able to control even advanced disease through combinations of specific drugs.”

Peter Johnson, chief clinician at Cancer Research UK, the specialist charity, adds: “We are moving into an era where we will have the tools to back cancer into an evolutionary dead-end.”

Cancer starts when a single cell undergoes a mutation that takes the biological brakes off and lets it divide out of control. The trigger for that may be damage to DNA caused by a carcinogen such as ultraviolet light or cigarette smoke, it may result from an inherited genetic weakness, or it may just be random bad luck.

Given that the average person contains more than 10 trillion cells – and the DNA copying process is far from perfect – it is amazing how rarely cancer gets going. But once it does, the disease throws many rules of human biology out of the window. In particular, cancer cells mutate far more rapidly than healthy ones.

Although most of these random mutations are harmful and kill the cells, they occur so frequently that occasionally the process will help the cancer proliferate, for example by building the blood supply that a solid tumour needs to grow and, most importantly, by becoming resistant to drugs prescribed to treat the disease.

“Cancer is a perversion of what the body originally produces – and the less a tumour looks like the tissue that originally gave rise to it, the worse it is for the patient,” says Prof Ashworth. “Cancers typically contain 10,000 to 100,000 genetic changes compared to normal cells, of which perhaps 10 are absolutely critical for the tumour’s growth and survival.

“It is important to realise that cancer has no ‘purpose’ – no drive to grow and spread,” he adds. “It is blind evolution, based on random genetic changes and natural selection.”

Cancer genomics – a new discipline based on reading all 3 billion chemical ‘letters’ of DNA in tumour cells – is opening researchers’ eyes to the astonishing rate of evolution. “The game-changer when it comes to our understanding cancer is the new generation of DNA sequencing machines,” says Charles Swanton, professor of personalised cancer medicine at the University College London Cancer Institute. “It is like moving from a black-and-white television with four pixels to a colour TV with thousands of pixels.” Instruments to read the sequence of four ‘letters’ that encode DNA (abbreviated as G, A, T and C) are doubling in performance per dollar spent every few months. This year, it will become possible to read a whole human genome in a day for less than $1,000. Eventually costs will fall far enough to make cancer genomics an affordable tool not just for research but in routine medical practice, to monitor the mutations taking place in patients as they are treated.

Although oncologists have long recognised that cancer is a genetic disease, the conventional view is that it progresses in a linear fashion, with all tumour cells genetically the same at any given point. But very recent research has knocked that idea on its head and added another layer of complexity to diagnosis and treatment.

A genomic study of advanced kidney cancer, carried out by Cancer Research UK and published this month [March 2012] in the New England Journal of Medicine, shows what Prof Swanton, its lead author, calls “an extraordinary amount of genetic diversity” within individual tumours. It confirms the findings of smaller genetic studies of leukaemia, brain and breast cancers. The kidney cancer patient examined most closely had 118 different mutations – of which 40 were present in all biopsies, 53 were present in most but not all samples and 25 were detected in just one. By analysing the location of mutations, the researchers traced the origins of particular sub-types of cancer cells back in time – creating a map of how the pattern of faults might have evolved. “We are seeing branched evolution that is very similar to the ‘tree of life’ diagram Charles Darwin produced in 1837 to postulate speciation [the process by which new biological species arise],” says Prof Swanton. 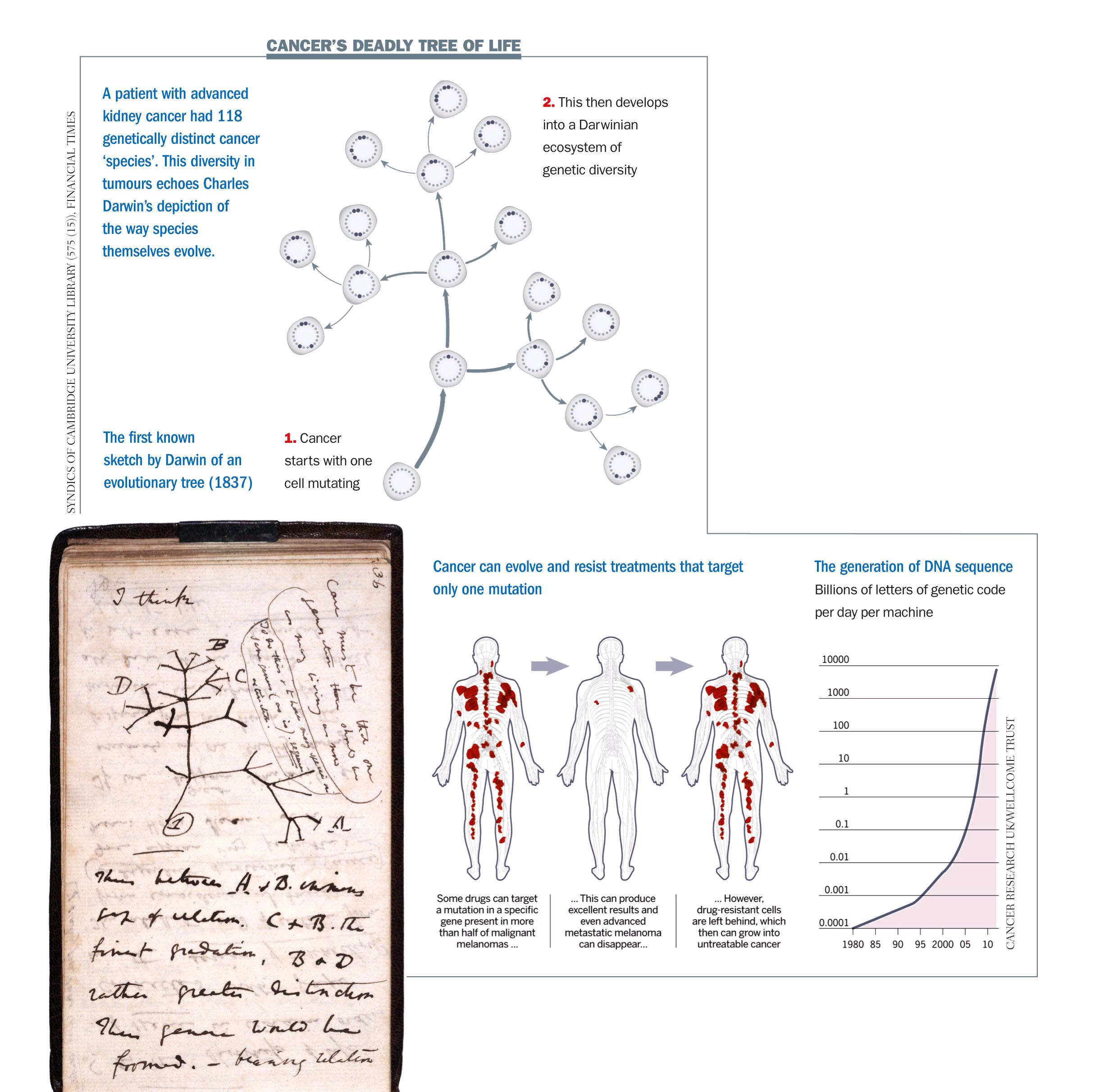 On the face of it, the heterogeneity of cancer within a single patient is bad news for diagnosis and treatment. It shows that a single biopsy may not reveal what is going on with someone and explains why many cancers are so hard to eradicate especially once they have spread beyond their original organ to remote ‘metastatic’ sites around the body, where different conditions drive their evolution.

But on the basis that knowledge is power, researchers can see a way forward. “This underscores the importance of targeting common mutations found in the ‘trunk’ of the evolutionary tree, as opposed to those found in the ‘branches’ which may only be present in a relatively small number of cells,” says Prof Swanton.

Scientists will need to pin down the ‘driver mutations’ present in the ‘trunk’ of each cancer’s Darwinian tree – and marry them up to the new targeted drugs emerging from clinical trials worldwide. Effective new drugs are coming on to the market. The latest is vemurafenib, marketed by Roche of Switzerland as Zelboraf. It targets a mutation in a gene called B-Raf, which is present in more than half of malignant melanomas and tells the cancer cells to keep on growing beyond the point that healthy ones should stop.

Many patients who have this mutation respond spectacularly well to vemurafenib; even advanced metastatic melanoma may melt away. But unfortunately a few vemurafenib-resistant cells are almost always left behind, and they seed a resurgence of the cancer, which this time is untreatable. Clinical trials show that a patient will typically gain four to eight months of life – which may be beyond price but is far from a cure.

“Drug combinations must be the way forward now that we know cancers are evolving in the body, just like viruses,” says Mike Stratton, director of the Wellcome Trust Sanger Institute, a genome research centre near Cambridge, and leader of its cancer genome project. “We should be able to control even metastatic cancer if we can find the right combinations of drugs, just as we can control HIV.” Cancer cells, like viruses, would find it far harder to develop resistance to drug combinations than to single drugs, because this would require multiple mutations of the right type to take place at the same time. So academic and industrial research teams are stepping up their development of targeted anti- cancer cocktails.

For instance, GlaxoSmithKline is carrying out clinical studies of two experimental drugs that are active against advanced melanoma. One, called dabrafenib, targets the B-Raf gene like Roche’s vemurafenib; the other, trametinib, aims at a different cell signalling gene called MEK. The company is seeing how well the two drugs work together and in combination with other promising anti-cancer agents including one developed by a Swiss competitor, Novartis. “The science is evolving at the speed of light, which is fantastic for the patient,” says Paolo Paoletti, president of GSK Oncology, a unit of the UK-based drugmaker. “But collaboration between pharmaceutical and biotechnology companies will be essential.” Such collaboration will extend beyond drug development to diagnostic tests that tell doctors which treatments are most likely to benefit individual patients, based on the genetic profile of their disease. Though the cost of full genome sequencing is falling fast, it will be several years before it is cheap enough to apply routinely to all cancer cases.

“The science is evolving at the speed of light, which is fantastic for the patient”

Meanwhile, a plethora of biotech companies are developing more limited tests based on ‘biomarkers’ – genes or proteins that predict a patient’s response to particular drugs. One such company is Oxford Cancer Biomarkers, just spun out of Oxford University. “Our strategy is to take the 30 most important cancer drugs and develop biomarkers for each one,” says Nick La Thangue, professor of cancer biology at Oxford. “The clinician would take a biopsy every six months or so – and use the biomarkers to capture genetic changes before the tumour becomes resistant to the therapy.”

So how excited should we be about the prospects of using the latest genetic breakthroughs to cure cancer? The scientist who has been working longest on DNA is bursting with enthusiasm. James Watson, who discovered DNA with Francis Crick in 1953 and is still active in genetics research at Cold Spring Harbor Laboratory in the US, says: “We have made immense progress recently but no one in the cancer community wants to be seen jumping up and down with excitement, because researchers have been over-optimistic in the past.”

But Dr Watson adds emphatically: “New science of the past year makes me optimistic that the back of most incurable human cancers may be broken over the next five to 10 years.”

This article was first published in the Financial Times on 20 March 2012, and is reprinted here with permission. © Clive Cookson