According to an article by Rifat Atun and Franco Cavalli in the Lancet (03 Feb 2018) the global fight against cancer is hampered by multiple barriers that include a lack of robust leadership, lack of a cohesive global social movement, a fragmented narrative, poor alignment to other important global health goals, weak health systems, low capacity, lack of finance and stigma. These issues and others were highlighted at the World Oncology Forum meeting in Lugano in October 2017. Articles and short videos from this event have already appeared on the Cancer World site. A longer video published here for the first time gives insights into some of the challenges identified by Atun and Cavalli. It highlights the way that cancer has become the leading health challenge in many low and middle income countries and how, globally, cancer has become the limiting factor on increasing life expectancy.

Low and middle income countries struggle with a long list of issues to address in a cancer control plan. They lack the human resources to turn these into effective plans of action and to secure the potential economic and health gains. Only one country in five can accurately report mortality data from cancer to the World Health Organization.

Global support for cancer is called into question – since it often does not start from the needs of countries or engage fully with the teams working on health issues within countries.

WOF saw a discussion of priority issues to bring to the attention of donors – including the need for a tobacco free world, a cervical cancer free world, the majority of women cured of breast cancer, higher rates of cure for children and the need for effective cancer registries to track trends.

There were pleas to back the universal health coverage campaign that has emerged from the United Nations Sustainable Development Goals, and to support the City Cancer Challenge.

This 18 minute video is the equivalent of a long read. It captures the flavour of discussions at WOF – without a commentary and in the words of the people who were there. It gives an insight into why global statistics on mortality from cancer are not going to show a downturn any time soon and some of the things that need to be done to overcome these obstacles. 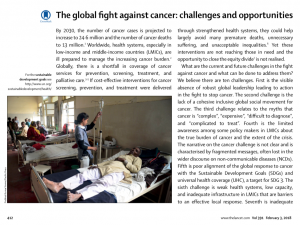 The video has been produced by Cancer World journalist Peter McIntyre.