The Seattle Cancer Care Alliance has added physician-assisted suicide to its host of services for patients within the final six months of life. According to a recent report published in the New England Journal of Medicine, the programme has been well received by patients and clinicians alike. So, why lose sleep?

This article was first published in Nature Reviews Clinical Oncology vol. 10 no.7, and is published with permission. © 2013 Nature Publishing Group. doi:10.1038/nrclinonc.2013.88

About two years ago, the Seattle Cancer Care Alliance (SCCA) added physician-assisted suicide to their list of offerings for terminally ill patients thought to be within six months of death. A recent publication in the New England Journal of Medicine[1] describes how this service, sanctioned under the Washington Death with Dignity Act, has turned out. Although the report includes all the expected metrics – how many people inquired into the Death with Dignity Program, how many received a lethal prescription of secobarbital, how many died as a result of said prescription – the authors’ take-home message is that the programme has been well accepted by patients and clinicians, and that the business of medicine at SCCA goes on as usual. So, why lose sleep?

According to Greek mythology, a Chimera was a monstrous fire-breathing creature, usually depicted as a lion, with the head of a goat arising from its back and a tail that ended in a snake’s head. Describing such a creature depends completely on where one stands; based on their vantage point, observers might conceivably recount accurate and yet entirely contradictory images. Clearly, the issue of physician-assisted suicide and euthanasia is a modern day Chimera, and it remains amongst the most polarising and contentious issues in all of medicine. Legions of opponents and proponents have waged battle, armed with powerful and seemingly convincing arguments: autonomy, the sanctity of life, the right to die, the slippery slope, the imperative of palliative care, the integrity of medicine as we know it and, lest we forget, dignity. And yet, we seem no closer to resolving how to tame this beast; as my daughter, who studies medieval literature, tells me: “slaying dragons is a tricky business” (LJ Chochinov, personal communication).

It seems futile to rehash all the same arguments, and hubris to think that one more voice, on either side of the political/legal/ethical/clinical fence, could make any real difference. Although the report1 suggests that there is no need to lose sleep, I find myself unable to rest easy. For instance, we are told that of 200 surveyed SCCA physicians, 29 respondents identified themselves as willing to consult and prescribe for the Death with Dignity Program. Aside from their willingness to be involved with the programme, nothing is said about their expertise in attending to the needs of dying patients. Given that a desire for death and requests for assisted dying are usually driven by psychosocial and existential considerations,[2,3] it is important to know what level of expertise these physicians have in those matters. Prior studies on healthcare provider willingness to offer assisted suicide demonstrate an association with various personal factors, including concerns about analgesic toxicity, diminished empathy and lesser knowledge of symptom management; in fact, it would seem that doctors who have least contact with patients with a terminal disease are most likely to support legalisation of assisted suicide, while those with the most experience are oppositely inclined.[4–6]

The Death with Dignity Program describes a prominent role for designated social worker patient advocates.1 Advocacy consists of confirming that a terminal prognosis has been documented, arranging for a prescribing physician, documentation of the patient’s wish for physician-assisted dying, verifying that the patient is a Washington resident and, most critical, the completion of a psycho-social assessment – that is, evaluating patients for depression and decision-making capacity. Although the report is silent on the characteristics of these social workers,[1] prior studies examining the role of mental health professionals in hastened death decisions are telling. A study of psychiatrists in Oregon found that those opposed to assisted suicide were more likely to work with the patient to prevent the suicide, whereas those who supported it were more likely to either take no further action or support the patient in obtaining a lethal prescription.7 The authors conclude that, “[psychiatrists’] moral beliefs influence how they might evaluate a patient requesting assisted suicide”. Only 6% of psychiatrists were very confident that they could adequately assess whether a psychiatric disorder was impairing the judgement of a patient requesting assisted suicide within a single session; just over half felt very confident that they could do so within the context of a long-term relationship.[7] What implications does this have for healthcare providers and consultants who are neither mental health experts, nor necessarily know patients for any extended period of time?

Loggers et al.[1] indicate that no one given a lethal prescription required a mental health evaluation for depression or decisional incapacity; in fact, Death with Dignity participants were infrequently referred to the pain or palliative care services. Why might that be? The authors report that it was because of an absence of symptoms at the time of the request to be part of the programme. It would seem then, that symptoms indicative of suffering, such as losing autonomy, loss of dignity, feeling a burden to others (all prominent amongst the beneficiaries of the Death with Dignity Program), are not on the therapeutic radar, or perhaps deemed beyond the purview or reach of medicine.

‘Death with dignity’ has become a global euphemism for physician-assisted suicide and euthanasia. That these measures are so universally affiliated with the language of dignity is surely an indictment of the culture of medicine, which largely ignores death and tends to abandon patients when cure is no longer viable. This culture of medicine often fails to deliver adequate relief from pain and distress associated with terminal illness, despite there being effective means to do so (it is worse for dying children than adults; worse for the frail elderly and cognitively impaired; worse for people who are poor, members of ethnic minorities or the disabled; worse for people with non-cancer-related fatal illnesses; and worse for people living in rural or remote regions).[8] When lethal prescriptions and fatal injections are hailed as ‘death with dignity’, it underscores how few expectations patients have of medicine, and its ability to offer effective, humane alternatives.

Dignity-conserving palliative care requires thoughtful attention to patients’ physical, psychological, existential and spiritual dimensions of suffering.[9] It requires that personhood not be overshadowed by patienthood. When our research group published a dignity-conserving approach to end-of-life care,[10] Faye Girth, the executive director of the Hemlock Society USA (which was a national right-to-die organisation) conceded “if most individuals with terminal illness were treated this way, the incentive to end their lives would be greatly reduced”.[10] To be clear, palliative care should no more be seen as the perfect foil to suffering, than medicine should be pitched as the perfect foil to death. There will always be a tiny minority of patients who, in spite of the best care possible, will want to control the timing and circumstances of their death; and will want the law of the land changed so as to entitle them to have their physicians help them do so. One thing is for certain – this Chimera will not be easily slain.

The author is supported from the Canada Research Chair programme 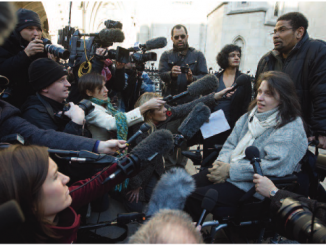