Doctors get cancer too, but not many of them choose to make a documentary  film about the experience. Vasiliki Michopoulou talked to some who did, and asked them why?

It’s October, 2004, and Nikos Karvounis, director of the First Oncology Clinic at Metaxa cancer hospital in Piraeus, Greece, is signing his own medical notes. He is 55 years old, and has just been informed that he has cancer in his intestine. It is the hardest time of his life. He feels that time is starting to run backwards, and for the first time he finds himself in the position of his patients. He asks his colleagues to operate on him, fighting his own battle with cancer among his cancer patients, whom he keeps encouraging, while trying at the same time to encourage himself.

The emotions and insights generated by this ‘two-way’ battle would later be captured in a documentary by film director Stavros Psillakis. First shown in April 2012, Metaxa: Listening to Time heard not just from Karvounis, but from six other doctors at the cancer hospital who had themselves been diagnosed with cancer.

The film created quite a stir. Because, as Psillakis comments, we all think that doctors are invulnerable, “something like little gods”.

“Working at a place where everything reminds you of your illness is scary,” says Karvounis, who today is back in good health. A father of six, with a love of cinema – he’s a particular fan of Tarkovsky – it was his idea to make this documentary. “Imagine looking at a case similar to your own. You examine your patient’s medical file and you wonder why they are still alive, or why they are doing so poorly. You can’t control it. I had never imagined that I would get cancer. It’s hard because, as an oncologist, you know the biological course of the disease, you know how these people die, you can imagine what the end of your own life will be like. The worst thing is that you do not know if you’re ‘finished’ or if you will live a little bit longer.” 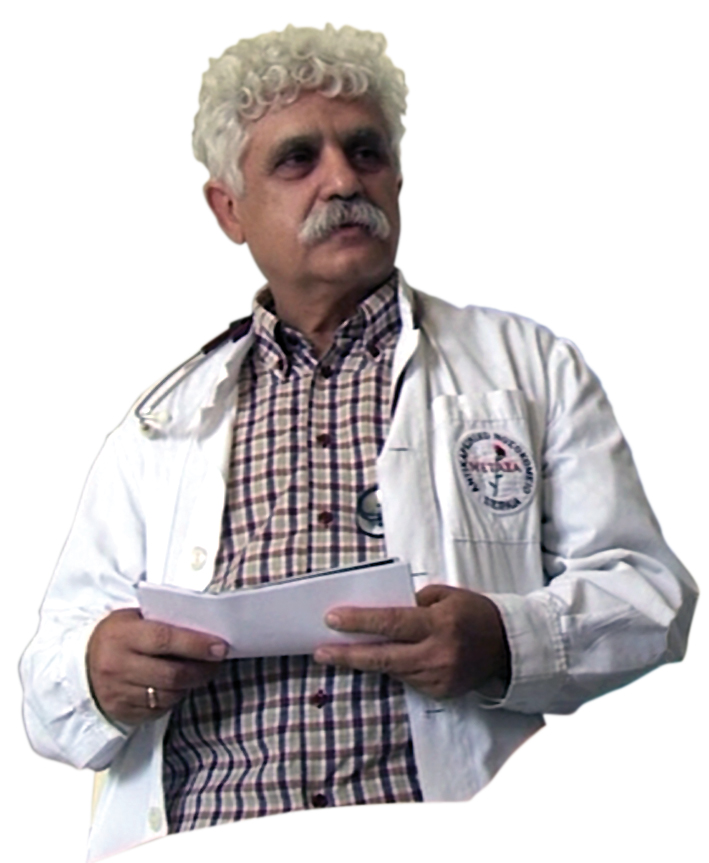 “I feel so familiar with the disease that I think of it as a normal part of life, as a bell that reminds you that the countdown has started ”

Karvounis believed that that he would be able to expose his life to the camera without appearing either to wallow in misery or to preach. “I saw it as exposing my inner self in a creative way,” he explains, “allowing people to interpret the film in their own way and extract messages for themselves.” He discussed the idea with a group of colleagues at the hospital, who had all been treated for cancer, and introduced them to the director, and the project grew from there. Despite its harrowing subject, the documentary comes across as a hymn to life, through the voices of the doctors diagnosed with cancer.

In the film, time acquires tremendous value. After the first shock of the cancer diagnosis, learning to live with the threat of the disease becomes a lesson in life, underlining the importance of every moment. Karvounis returned to his work as an oncologist within two months of surgery. Today, 11 years on, he says his attitudes have not changed, either towards patients or to himself.

“You do not change the existential anxiety you always have. I know well how cancer patients feel and react. I studied that before I became a patient. You do cry, if necessary for yourself and for the patient. But I’m not shocked by cancer. I feel so familiar with the disease that I think of it as a normal part of life, as a bell that reminds you that the countdown has started, that’s all. We will all die, but for some of us the end is unknown. I even knew how I would die [if the cancer proved fatal]. I have seen the same story unfold for the last 29 years.”

Nikos Bountouroglou is one of the three radiation oncologists who featured in the film. He was just 37 years old when, in 2008, he was diagnosed with cancer in the kidney. He had his own reasons for wanting to participate. 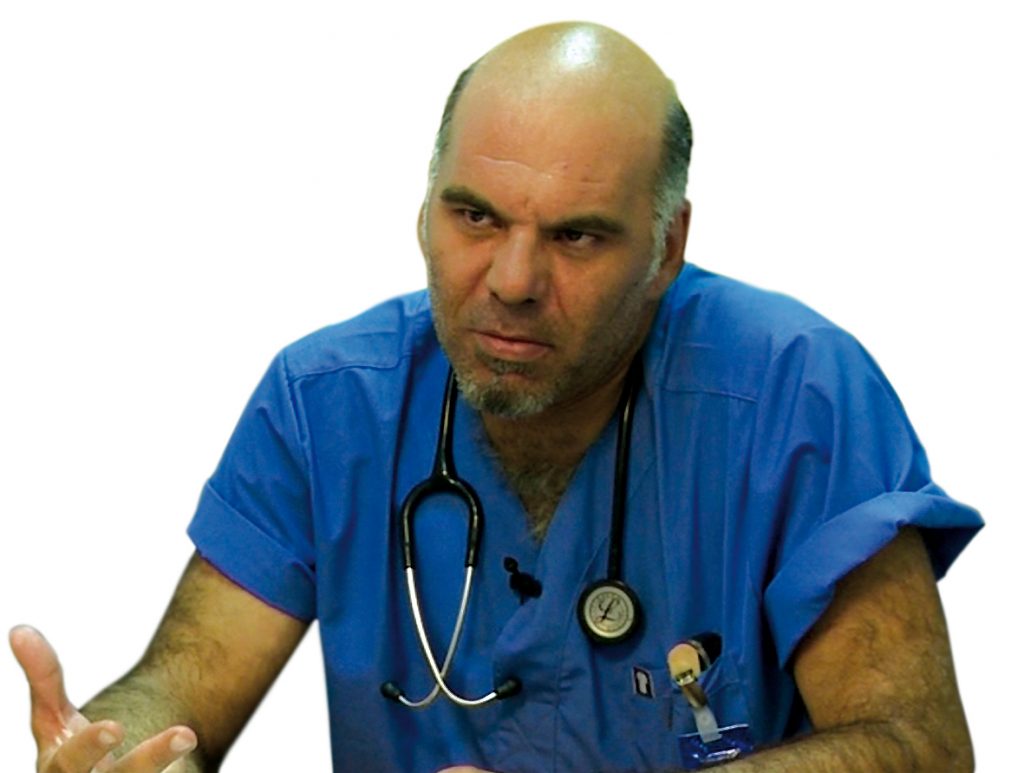 “ It’s that ‘click’ that you feel for the patients when you have experienced how they feel. It brings you closer to them ”
NIKOS BOUNTOUROGLOU

“This film is not a self-help guide for cancer patients and their relatives,” he stresses. “It talks about the power of the human mind, for the collectivity, the social colour of each individual adventure. It talks about the existential condition of man when he faces extreme situations. I participated because I wanted to send the message that the doctor is a human being and has the same problems that you have, so we are the same. People hide their illness and my participation was a battle against that. There is no need to hide it. We need to come out and say it in public. Yes, I got sick!”

In contrast to Karvounis, Bountouroglou has noticed a change in his attitudes and his behaviour. “After my cancer, my relationships with people became more qualitative.
I think of them first as human beings and then as a doctor. I have my phone available 24 hours a day for my patients. Unfortunately, I have lost patients, and I have cried many times thinking about what I could have done for them.”

He does try keep a distance, to avoid identifying too closely with his patients, but says he finds it hard to stay uninvolved. “It’s that ‘click’ that you feel for the patients when you have experienced how they feel. It brings you closer to them, and you fight alongside them in a double battle.” He says he always tells his patients about his own experience with cancer, and urges them not to let the disease take over their lives. “Do not lose a minute of what you are offered at any moment.”

The value of time, and regrets over wasted time, was something that also preoccupied his wife, Aphrodite, after his cancer diagnosis, Bountouroglou remembers. She thought about all the time the two of them had not used to the full, he said, and worried about the many things they might not manage to do.

Time also matters in other ways when you have cancer. Bountouroglou, who is vice president of the Metaxa hospital staff association, is acutely aware of the long and stressful delays in accessing treatment, and worries about the impact on patients. It starts, he says, with a four-month waiting list just to see a specialist. It can then take up to three months to get the results of diagnostic tests, followed by a further two-month wait for surgical treatment. Adjuvant radio- or chemotherapy, which should start soon after the surgery, also has waiting lists of typically around three months.

“The health system does not function properly, because of budget constraints, which is putting patients at risk,” he says. “There are many cases with fatal outcomes. While the number of new cancer cases is increasing, the public health system is deteriorating, and access to healthcare is becoming increasingly restricted. People are constantly being asked to pay for essential drugs or radiotherapy treatment or for diagnostic tests.” Health cannot be treated as a commodity, he says. “It is a social good.”

While Bountouroglou’s concerns about the state of cancer services are shared by many of his colleagues, they did not get an airing in the documentary. The intention, says Maria Pulizzi, a fellow radiation oncologist, and survivor of kidney cancer, was to create something positive. 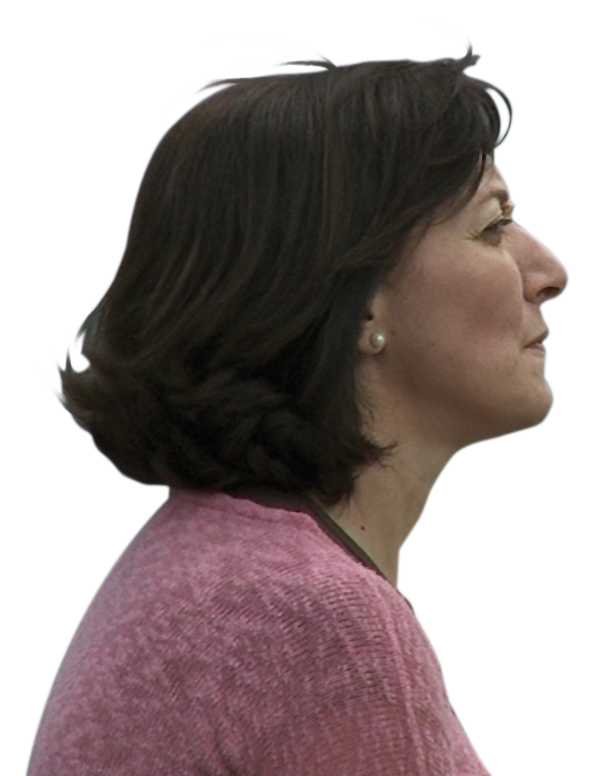 “ Fear is fear, whether you are a doctor or patient. The disadvantage is that, as a doctor, you know what comes next ”
MARIA PULIZZI

When she was asked to participate in the film, less than two years since her cancer was diagnosed, metastases had already spread to her lung and bones. She was looking for drugs in early trials that could help her. She describes her participation in the film as a painful, but liberating, experience. When she finally agreed, it was for two reasons: “I wanted something optimistic to come out of this film, because everything around cancer is dark and miserable. We all agreed on this and I think that this was our great achievement. Moreover, this was for me a personal need.”

The second reason, she says, is that it brought people together. “We shared what was happening to ourselves and to other people, especially with colleagues, and we became very close.” This, can be seen in the film, she says, because, while each person spoke to the camera without knowing what any of the others had said, “when we finally saw the film, we found out that we had complemented each other like the pieces of a puzzle.”

Pulizzi feels the people with cancer suffer an added burden and isolation due to the stigma surrounding the disease. “Patients feel that they are being punished for something by God or fate. They can’t accept cancer as a pure coincidence.”

As a result, some people don’t even talk to the people closest to them about their cancer. This can lead to lasting problems, she says, because, however successful the treatment, the sense of a threat of recurrence never really goes away, so people need continuing support. Pulizzi was particularly pleased, therefore, by feedback from many patients who said the film had helped them speak more openly about what they were going through.

“We succeeded through the film in helping people talk about their illness with the people around them. They did share, those who were ready to do so.”

Some of her patients, she says, are so overwhelmed by fear that they retreat into a shell and find it difficult to talk. She finds that by talking about her own story she can help restore in them some sense of hope and confidence. “I always tell my patients, particularly young people who are scared or showing passive behaviour, that I had cancer. It’s a myth that there is no salvation. It’s now been seven years since my diagnosis, and for the last three and a half years I have been without medication. Completely cured. Even my colleagues didn’t believe it. There is great progress nowadays in cancer treatments. It’s not true that nothing can be done.”

Pulizzi believes that one’s attitude toward cancer is one’s attitude to life itself. But she recognises that she used to be too hard on patients when she pressed them to adopt a more positive attitude. When she got ill she understood how it felt not to be so brave.

“Fear is fear, whether you are a doctor or patient. The disadvantage is that, as a doctor you know what comes next, and you are more vulnerable, while the patient seems to be more protected in their ignorance. If you are someone who has learned to fight in life, you will be prepared to do it. But you cannot demand it. I demanded that of my patients and it was wrong.”

That fear, as she knows, spreads well beyond the person with cancer. Her son Andrea was only 13 years old at the time she was diagnosed, and Pulizzi describes it as the worst period of his life. “He became distanced, because of the fear of pain. He didn’t visit me in hospital. He didn’t even call me because he was afraid of what he would hear.”

The film, she says, helped Andrea, “because for the first time he heard me talking about my cancer.” And the story she told wasn’t all bad. “Cancer helped me too,” says Pulizzi. “It changed my attitude towards life and my priorities. I understood the true significance and value of things. I needed to be ‘slapped’ in order to recognise the real essence of life.”

Metaxa: Listening to Time,
is available on DVD, with English subtitles,
from www.tetraktysfilms.com,
price €200 plus shipping.