Gemtuzumab ozogamicin was withdrawn from the market after being evaluated in combination with chemotherapy in the frontline treatment of patients aged 18 to 60 years with acute myeloid leukaemia (AML). More-recent randomised trials demonstrate that low doses of gemtuzumab added to cytarabine and anthracycline-based chemotherapy benefit patients with better-risk AML.

This article was first published in Nature Reviews Clinical Oncology vol. 9 no.6, and is published with permission. © 2012 Nature Publishing Group. doi:10.1038/nrclinonc.2012.83

Treatment of patients with acute myeloid leukaemia (AML) has not changed significantly since studies in the 1980s established cytarabine and anthracyclines as the most effective agents in this disease. Several randomised trials have demonstrated that the doses of cytarabine and anthracyclines are important in specific subsets of patients. A meta-analysis of trials comparing high-dose with standard-dose cytarabine during induction has shown an improved relapse-free and four-year overall survival for patients younger than 60 years with de novo AML who receive high-dose cytarabine as a part of their induction regimen.[1] This finding was further corroborated by a recent randomised trial demonstrating a higher response rate and improved overall survival in patients younger than 46 years who received high-dose cytarabine induction compared with those receiving the standard cytarabine dose (six-year overall survival 52% vs 43%; P=0.009).[2] Other data have suggested that further escalation of the cytarabine dose beyond levels that saturate intracellular arabinofuranosylcytosine triphosphate is not beneficial.[3]

Cytarabine dose is particularly important in the treatment of patients with the core-binding factor leukaemias, which have a more favourable risk profile; the administration of several courses of high-dose cytarabine as consolidation therapy improves the survival of these patients.[4] In addition, a higher dose of the anthracycline daunorubicin (90 mg/m2 vs 45 mg/m2) benefits patients younger than 60 years, with the exception of those with adverse cytogenetics and molecular aberrations (such as FLT3 internal tandem duplication).[5]

Clearly, escalation of chemotherapy dose seems to benefit patients with more favourable risk disease including young patients and those with more favourable cellular biology determined by cytogenetics or molecular abnormalities. It is tempting to speculate that the leukaemic cells in these patients are more susceptible to the effects of cytotoxic chemotherapy because of as yet unidentified mechanisms. Therefore, the limiting factor in such patients will be the limits of tolerability of the escalated dose of chemotherapy. Other agents with novel mechanisms of action and with non-overlapping toxicity can potentially further improve the outcome when added to the intensified standard regimens. These potentially include cladribine, clofarabine, FLT3 kinase inhibitors and gemtuzumab. 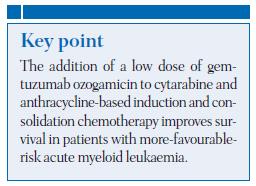 A recent study by Castaigne and colleagues6 is among several important randomised trials evaluating the benefit of a low dose of gemtuzumab added to the back-bone of cytarabine and anthracycline-based induction chemotherapy. In this trial, 280 patients with newly diagnosed AML aged between 50 and 70 years were randomly assigned to receive cytarabine 200 mg/m2 as a continuous infusion for seven days and daunorubicin 60 mg/m2 daily for three days with or without a fractionated course of gemtuzumab 3 mg/m2 on days 1, 4 and 7.[6]
There was a significant overall and event-free survival advantage for the patients treated with gemtuzumab. At two years, event-free survival was 41.4% versus 15.6% in patients treated or not treated with gemtuzumab, respectively, translating to an overall survival advantage for patients who received gemtuzumab (median 25.4 months vs 15.3 months). This benefit was mainly seen in patients in the better-risk groups based on baseline cytogenetic assessment.

In the SWOG 106 study, patients between the ages of 18 and 60 years with AML were randomly assigned to receive chemotherapy with or without gemtuzumab 6 mg/m2, and although there was no overall survival benefit, patients with favourable-risk cyto-genetics who received gemtuzumab had an improved overall survival.[7] It is important to note that patients who received gemtuzumab were treated with a lower dose of daunorubicin (45 mg/m2 for three days, now considered inferior) compared with 60 mg/m2 for three days for patients not receiving gemtuzumab, with the intent of providing ‘equitoxic’ regimens.

With the exception of the SWOG 106 trial, where the addition of gemtuzumab was associated with a significant increase in induction mortality (5.8% vs 0.8%, although these data have not been well scrutinised), in all other reported studies, gemtuzumab was not associated with a significant increase in morbidity and mortality. In particular, and perhaps because of the low doses of gemtuzumab employed in all trials, the incidence of sinusoidal obstructive syndrome of the liver was low. Therefore, low doses of gemtuzumab are able to increase the intensity of induction therapy without increasing its toxicity and, in doing so, benefit the more-favourable-risk population of patients with AML. This benefit in patients with more favourable risk is as would be expected according to the arguments for the susceptibility of this population to dose intensification.

The trial by Castaigne and colleagues,[6] corroborated by data from several other randomised trials, clearly establishes gemtuzumab as an important drug for patients with better-risk AML. Why gemtuzumab is effective in this specific subset of patients requires further preclinical, translational and clinical studies. Its high efficacy in treating acute promyelocytic leukaemia (APL) is well established and may be related to the higher expression of the target molecule, CD33, in APL cells. Pending these studies, however, the benefits of gemtuzumab should not be withheld from the appropriate patients (including those with APL). Progress in AML has been slow. We clearly need to accept positive data produced and confirmed by several randomised trials.

8. AK Burnett et al. (2011) Identification of patients with acute myeloblastic leukaemia who benefit from the addition of gemtuzumab ozogamicin: Results of the MRC AML15 trial. JCO 29:369–377