If the 181 entries to this year’s Cancer World Journalism Award proved anything, it was that journalists are putting cancer on the agenda in every corner of the world.

Articles and programmes were submitted from 39 countries, and most were not produced by specialist writers, or aimed at health-educated audiences. They were produced by general journalists, writing for a mainstream audience – revealing the realities of cancer care in their countries, improving understanding of cancer risk and cancer science, and giving a voice to those who have experienced cancer.

As one of the judges, I found the experience of reading all those entries deeply impressive, moving even. Five years ago, the predecessor to these awards – Cancer World’s Cancer Reporter of the Year Award – was attracting around 40 entries. The quality was variable, the entries dominated by specialist health writers, usually from within Western Europe. Today, the re-booted Cancer World Journalism Award is bearing witness to a global explosion of journalistic passion about cancer.

Let me provide an example. The link between oral cancer and chewing paan, gutka and other tobacco products has been documented for decades, and there is evidence that oral cancer is the most frequent cancer in men and the second most frequent cancer in both sexes in Pakistan. But publicity in Pakistan has been largely limited to reports of conferences and journal articles. Faiza Ilyas, a reporter for Pakistan’s Dawn newspaper took public profile of the issue a step forward.

Her article “Oral cancer epidemic in the making due to gutka, paan consumption” not only drew public attention to paan-linked cancer being commonly found in people as young as 18 years of age, but also highlighted lack of treatment facilities, the scourge of a “gutka mafia” in every neighbourhood and the need for government action.

On learning she had won the prevention category of the award Faiza Ilyas said it was a honour for her and her newspaper “where I believe a strong understanding exists about the challenges Pakistan face in the health sector. I dedicate this award to all journalists trying to make the world a better place to live in.”

Dozens of other journalists showed equal determination to shine a light where politicians, vested interests and even health professionals might not look or want to look. Other winners included: Swagata Yadavar’s data-led investigation into India’s growing cancer crisis centred around patient experiences at the Tata Memorial Hospital in Mumbai; Laure Andrillon’s exploration of the views and experience of French women who chose to “stay flat” following mastectomy; and Max Rauner’s evaluation of the potential of computer simulation in guiding treatment decisions.

There were interesting regional variations. Entries from Africa reflected the rise of breast cancer and lack of support for women. Those from South America revealed concern about carcinogens, particularly from agriculture and food production. Growing awareness of cancer in both Africa and Asia generally seems to be driving a wave of investigations into the inadequacy of services.

Throughout there were articles and programmes driving progress and understanding: an appraisal of the reality behind excitement about CAR-T cell therapies in China; a personal account of the struggles of Palestinian women getting treatment for breast cancer; an investigation into the lack of dermatology services for melanoma in the US; a TV documentary looking at the pricing practices which put new cancer drugs out of reach for most of South Africa’s cancer patients.

All these entries fulfilled our main criteria for what we were looking for: pieces which address urgent questions, increase awareness and prompt improvements. High quality media coverage can bring positive change because it forces influencers to notice and listen – for example when the public is made aware of the realities of the cancer experience, or the need to address inequalities. This has been recognised by the ESO since 2006, when it launched its first awards scheme to encourage and reward good journalism.

There are many reasons why there has been such a global burgeoning of good cancer journalism in the past decade. The growing number of outlets on the internet – some of which break the conventional publishing models – have provided a new ease and freedom for journalists, and levelled the playing field across the world. Committed journalists are finding new ways to reach an audience.

Another factor is growing recognition of the important role of journalists in building public engagement with science and medicine. And the encouragement of Cancer World’s journalism awards is also probably playing a part.

Cancer journalism should never be the sole province of specialist writers producing stories from privileged corners. The best journalism is often produced when a subject is approached afresh, cutting across the easy complacency of insider knowledge. It revolves around an inquisitive mind, a determination to listen and understand, and an ability to vividly connect with a wide audience in conveying the reality they see. The new global democracy of journalism is bringing some fine media coverage of cancer issues, and more important than that, it is bringing change. 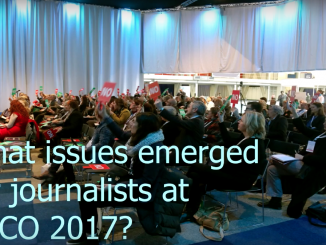 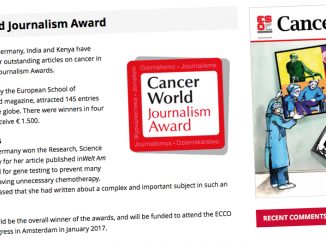 Kudos to the recipients of the Cancer World Journalism Awards 2016