When it comes to deciding the age for starting mammography, family history of cancer should count more, according to an analysis of Swedish registries just published in JAMA Oncology.

To identify the risk-adapted starting age of breast cancer screening on the basis of a woman’s detailed family history, Trasias Mukama, from the National Center for Tumor Diseases in Heidelberg, Germany, and colleagues looked at data from Swedish datasets on 5,099,172 women born there from 1932 onward; at the end of the period of analysis, 118,953 (2.3%) had received a diagnosis of primary invasive breast cancer, the majority of whom (86.4%, namely 102,751) had no previous family history of the disease.

The risk-adapted starting age of screening was defined as “the age at which women with a particular family history of breast cancer attained a similar level of 10-year cumulative risk to the threshold level at which women in the general population are usually advised to initiate screening”; one of the main result of the study is that age at which this risk was achieved varied by the number of relatives affected.

For example, when screening is recommended at age 50 for the general population, women with one affected first-degree relative (FDR) had a similar risk (2.2%) ten years before, at age 40, while those with one second-degree relative (SDR) but no FDR attained a similar risk five years before, at 45. Age at diagnosis of the FDR also modifies the age at which initiate screening: if screening is recommended to begin at 40 for the general population, women with one FDR reached the same risk at age 30 overall, but that spans from 32 for women whose relative was diagnosed with breast cancer from ages 40 to 44, and it increases up to 36 for women with a relative diagnosed after age 50.

However, according to the accompanying editorial, the incorporation of these findings into breast cancer screening presents some challenges: “identification of a subset of the population who may need to initiate screening earlier must be balanced with potential costs of false-positive results, particularly given that the number of additional cases that would be detectable by screening would still be relatively low in younger women”, the editorialists wrote. “Population-wide, risk-stratified screening programs have the potential to improve the cost-effectiveness of mammographic screening and to reduce potential harms from over-diagnosis and false-positive findings, but such programs might require reducing screening for those at low risk and increasing screening for those at high risk”. In addition, because more than 85% of women with a diagnosis of primary invasive breast cancer in the cohort did not have a family history of breast cancer, estimates based only on family history would not apply to them: guidelines should integrate additional information from common variants and classical risk factors. 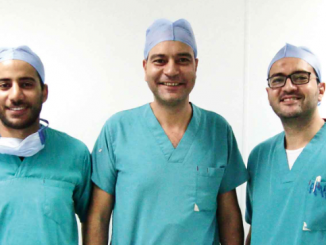 Omar Youssef: aesthetic surgery is not just a Western luxury