Umberto Veronesi passed away on the 8th of November 2016, at the end of a career dedicated to fighting cancer. During his long and productive life he made significant contributions to improving cancer care and prevention, to the methodology of clinical research and to medical education and cancer policy.
He had the ability to bring together people from many different backgrounds, through his enthusiasm for basic and clinical research and his optimistic view that cancer is a preventable and treatable disease. And he used his sharp, creative mind to capture the attention of policy makers and raise the profile of cancer and cancer control throughout Europe.

He died in peace, at home in Milan, the city where he was born almost 91 years ago.

A force for medical progress

Veronesi’s career paralleled many advances in cancer over the past 60 years, and not by coincidence – he was a driving force. He was the first to conceive of curing breast cancer without mastectomy, and he conducted seminal studies on melanoma, the sentinel node, intraoperative radiotherapy and chemoprevention. 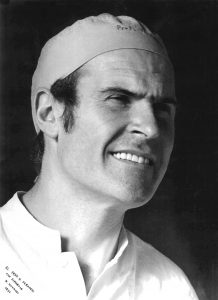 He will be best remembered, perhaps, as a pioneer of breast conserving surgery – a gentler and more scientifically based approach, aimed at administering the ‘minimum effective’ treatment, in contrast to the paradigm of ‘maximum tolerable’ treatment that had gone before.

Veronesi designed the first prospective randomised trial to establish the safety and efficacy of a technique limiting surgery in patients with early breast cancer to the affected quadrant of the breast. The Milan I trial (1973–1980) compared the outcomes of radical ‘Halsted’ mastectomy – the standard of care at that time – against quadrantectomy, together with axillary dissection and breast radiotherapy.

The first results, published in 1981, showed that women treated with this new breast conserving approach had the same survival and disease-free survival as those treated with more radical and debilitating surgery. The study update, with a 20-year follow up, confirmed the preliminary findings, establishing breast conservation as the new standard of care. 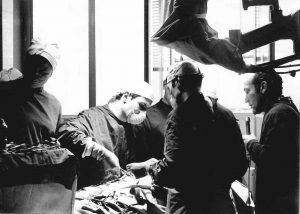 Veronesi went on to extend the concept of ‘less surgery’ to the treatment of the axilla. He led a series of trials looking first at the role of radiotherapy in reducing axillary metastases, and later at the use of the sentinel node biopsy to predict whether a cancer has spread to the lymph nodes. By randomising women with early breast cancer to receive immediate axillary dissection or to receive it only if the sentinel node was involved, he was able to show that sparing axillary nodes if the sentinel node was clear did not jeopardise cancer outcomes in any way.
The long-term analysis showed that treating according to the sentinel lymph node biopsy not only saved women from potentially debilitating and chronic complications such as lymphoedema, but also resulted in lower death rates.

These large randomised trials conducted in the 1970s and early 1980s changed the direction of breast cancer care. They also confirmed the hypothesis underlying this change of direction, namely that the prognosis of breast cancer patients is linked to the presence or absence of distant metastasis, which is why changes in local treatment do not affect overall survival.

Breast conservation became not only a viable option, but a standard treatment, and the trials updates published in the beginning of the twenty-first century confirmed that mutilating interventions such as radical mastectomy belong to the past.

Not content with innovating, Veronesi took responsibility for ensuring that the new treatment approaches he and others were developing would be adopted quickly and effectively wherever cancer patients are treated. In 1982 he founded the European School of Oncology (ESO), which for the past 35 years has played a role in shaping the practice of thousands of oncologists, including many leading figures on the European and international scene.

It is a credit to his broad vision and foresight that, at a time when medical oncology was still an emerging specialism, he understood the need to teach cancer care from a truly multidisciplinary perspective, which is how ESO came to be the first European organisation led by top figures from the world of the three pillars of oncology – cancer surgery, radiotherapy and medical oncology.

He later extended this concept with the founding of EUSOMA, the European Society of Breast Cancer Specialists, which was Europe’s first multidisciplinary organ-based professional oncology society.

Less well known, perhaps, is the catalysing role he played in the birth of Europe’s cancer patient advocacy movement. Impressed by what had been achieved by AIDS activists, and by the growing breast cancer advocacy movement in the US, Veronesi was convinced that something similar would be a key driver pushing quality of care agendas in Europe. He paved the way for the establishment of Europa Donna, the first European cancer patient advocacy group, which notably went on to lead efforts to establish European policy supporting specialist multidisciplinary breast units.

Veronesi was also very active in his own right at a policy level, both in Europe and in his native Italy – where he served terms as Minister of Health and senator.

Europe Against Cancer – the bold European Community project that put cancer on the agenda of governments across Europe – was conceived and defined by Veronesi, together with Maurice Tubiana, ‘the founder of modern radiotherapy’, who at that time headed France’s Gustave Roussy Institute.

This was 1985 – a time when Mitterand’s France and Andreotti’s Italy were leading efforts to forge a European identity that citizens could relate to. Veronesi and Tubiana saw their opportunity. The one-page plan that they had the political acuity to draft and get in front of the crucial Council of Ministers meeting ultimately gave rise to a raft of enormously significant initiatives, including the European Cancer Code, Europe’s anti-tobacco policies, the EU cancer screening guidelines, the Eurocare survival studies, minimum standards for oncology education, and more.

A champion of open science

Character, commitment, energy and intellect were clearly central to who Veronesi was and what he achieved. But it was his uncompromising belief in science and the principles of evidence-based medicine that underpinned his great contributions to improving cancer care.

He played a pioneering role in developing the methodology of controlled clinical trials in cancer research, and he understood the paramount importance of transparency in study design, data collection and analysis, and full publication of results. He also believed in the principle of equipoise. In the last years of his life he raised ethical concerns about randomising patients in trials of new ‘rationally designed’ drugs, where proof of concept trials had already demonstrated potential benefit.

He championed the concept of academic research within cooperative groups, where trial data is widely shared, and can be explored in detail to derive new hypotheses that may eventually lead to even more precisely tailored treatments for future patients.

This is why he argued so strongly for a more equal relationship between academia and industry, where academia retains control of trial data – an issue he believed was particularly important for patients with early stages of disease, for whom over-treatment and adverse side effects are important considerations, and where commercial interests and patient interests are most likely to diverge.

His greatest legacy by far are the people – both patients and colleagues – who benefited from his energy, his inventiveness, and his boundless enthusiasm for his life-saving work.

His achievements should inspire new generations of cancer scientists to continue his quest to find better ways to control cancer, relying only on solid scientific objectivity and a steady purpose, without wasting time and energy pursuing the latest fashion in magic bullets. 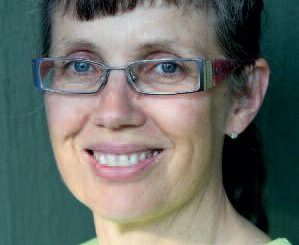 Everyone deserves the best chance to survive 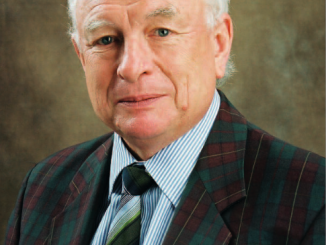 New drug combinations are not the solution: Sweden’s screening guru argues early detection is what works in breast cancer