Elderly breast cancer patients do not benefit from radiotherapy

Most elderly patients with pT1 breast cancer treated by quadrantectomy do not benefit from radiotherapy, the results of 15 years of follow-up of a prospective trial have found.

In 1987 Gabriele Martelli and colleagues, from the Milan National Cancer Institute, initiated a prospective non-randomised study to investigate whether radiotherapy of the breast can be safely avoided in elderly patients (over 70 years) undergoing conservative surgery (quadrantectomy) and prescribed tamoxifen.

“Data from the present prospective non-randomised study and randomised trials strongly suggest that in most elderly patients with pT1 cN0 ER-positive breast cancer treated by conservative surgery and tamoxifen, the contribution of RT [radiotherapy] to disease control is minimal and its omission does not impact on breast cancer mortality,” write the authors.

Data from the study, however, add the authors, suggests that patients with pT2 disease should receive radiotherapy to limit the number of local recurrences. “The novelty of our study is that tumour size (pT status) interacted significantly with the relation between RT and IBTR [ipsilateral breast tumour recurrence], and the 15-year CCI [cumulative incidence] of IBTR was much higher in the no RT than RT group in pT2 patients.”

The main limitation of the study, write the authors, is the possibility of bias in selecting patients for radiotherapy versus no radiotherapy. Although all patients were eligible for radio-therapy, it is likely that those in poorer general health tended not to receive it.

Physicians often have difficulty delivering bad news, finding the process stressful and demanding. Factors influencing their reluctance to deliver less optimistic messages to patients with advanced cancer include fear of being blamed, destroying hope or provoking emotional distress, and of confronting their own emotions and death. A further concern is that conveying less optimistic messages will make them be perceived as less compassionate.

Eduardo Bruera and colleagues, from the University of Texas MD Anderson Cancer Center, set out to compare patients’ perceptions of physician compassion after viewing videos showing two different scenarios. One showed a physician conveying an empathetic and more optimistic message about possible future treatment options to a patient with advanced cancer, and the other showed another physician conveying to the same patient an equally empathetic but less optimistic message about lack of future treatments. Each video lasted approximately four minutes and showed professional actors playing both the physicians and patient. The physician actors, who were both male, middle aged and white, made an identical number of empathetic statements (five) and displayed identical postures. In all the videos, the patient was portrayed by the same white actress, aged approximately 50 to 60 years.

“The finding that patients perceived a higher level of compassion and preferred physicians providing a more optimistic message may explain physicians’ reluctance to give bad news because of fear of being perceived to be less compassionate,” write the authors.

The study, they add, favoured the second video on compassion scores and physician preference. “A possible explanation… is that dialogue on difficult topics may need to be repeated and processed to become acceptable,” write the authors.

Further research and educational techniques in structuring less optimistic message content, they suggest, would help support professionals in delivering bad news, as well as decreasing the burden of feeling less compassionate in such instances.

The diagnostic precision of breast biopsy is not influenced by whether or not pathologists enjoy the technology, a US study has found.

In many medical specialties research has demonstrated positive correlations between job satisfaction and confidence in clinical skills and better patient outcomes. Conversely, a study among medical residency programmes reported that depressed physicians had a medication error rate six times higher than their non-depressed peers; while physicians with low career satisfaction report more difficulties in caring for patients. Other academic fields, such as education, cognitive psychology and sports science, have reported positive links between enjoyment of a task and enhanced performance.

In the current study Natalia Oster and colleagues, from University of Washington, Seattle, surveyed 252 pathologists to evaluate the relationship between their enjoyment of interpreting breast pathology and their diagnostic precision. The team hypothesised that pathologists who enjoy interpreting breast pathology would have a “higher diagnostic acumen” compared to those who did not enjoy breast tissue interpretation.

For the study, pathologists, who were recruited from eight US states and had been interpreting breast cases for at least one year, reported on a six-point scale how challenging they found breast cases to interpret, their confidence in assessment of breast cases, and their enjoyment of interpreting breast pathology, from 1 (‘very easy’) to 6 (‘very challenging’). Diagnostic performance was then determined by comparing pathologist assessments of a set of archived tissue samples in glass slide only or digital slide only formats with consensus assessments of the same cases from a panel of three experienced pathologists (the consensus reference diagnosis).

Results showed that 83% of pathologists surveyed (n=208) reported that they found interpreting breast tissue enjoyable, while 17% (n=44) did not. In comparison to pathologists who did not enjoy breast case interpretation, those who did were more likely to review more than 10 breast cases per week (38% vs 13%, P=0.003). They were also more likely to report that colleagues considered them an expert in breast interpretation (24% vs 13%, P=0.003), and to have a high degree of confidence in interpreting breast pathology (95% vs 80%, P<0.001).

A lack of enjoyment among even a small percentage of pathologists, write the authors, has the potential to contribute to future workforce shortages. But the development of whole slide digital technology for primary diagnosis, they add, may allow pathologists to outsource breast pathology to specialised laboratories and lessen future workforce concerns

Women younger than 18 years undergoing treatment for Hodgkin lymphoma can be reassured that pregnancy is possible. The German study following Hodgkin lymphoma survivors for more than 30 years after diagnosis found that parenthood was similar between survivors aged 20–39 years and the general population. Parenthood was, however, reduced among women aged 40–44 years and those receiving pelvic radiation.

Treatment of Hodgkin lymphoma in children and adolescents has become increasingly successful, with 80–90% now surviving longer than 20 to 30 years. Survivors are likely to consider pregnancy as they grow older, leading to concerns that gonadotoxic chemotherapy with procarbazine and cyclophosphamide, and radio-therapy to the abdomen or pelvis, could cause transient or permanent ovarian dysfunction.

In the prospective, longitudinal study, Jürgen Brämswig and colleagues, from University Children’s Hospital, Münster, Germany, compared parenthood in female survivors of Hodgkin lymphoma enrolled in five concurrent studies in Germany and Austria, (each assessing different chemotherapy and radiotherapy combinations) with parenthood in a female population control group. Altogether, 590 female patients who had been younger than 18 years at diagnosis and had been treated for Hodgkin lymphoma at one of 86 participating centres were compared to the female population reported in the 2012 Mikrozensus survey, which reached 802,000 people living in Germany and documented parenthood in five-year intervals among women aged 16–49 years, born between 1963 and 1996.

“The results of this study document an overall favourable prognosis for parenthood in female survivors of Hodgkin’s lymphoma. They will assist counselling of female survivors about their positive potential for future parenthood,” write the authors.

That parenthood was similar to the general population until the age of 40, write the authors, can probably be best explained by the higher number of primordial follicles in the pre-pubertal and pubertal ovary than in more mature ovaries. “By contrast, gonadotoxic treatment in adult female patients carries a higher age-related risk of infertility, probably due to the decreasing number and increased vulnerability of oocytes,” they add.

In an accompanying commentary W Hamish Wallace, from the University of Edinburgh, writes, “Current challenges remain to avoid radiotherapy without compromising survival in selected patients with Hodgkin’s lymphoma, and, for those in whom radiotherapy cannot be avoided, to provide fertility preservation counselling and consider ovarian tissue cryopreservation under the auspices of a clinical trial.”

In the current study, Stacey Kenfield and colleagues, from the University of California, San Francisco, prospectively followed 4,459 men diagnosed between 1988 and 2010 with non-metastatic prostate cancer in the Health Professionals Follow-Up Study. Subjects completed a validated semi-quantitative food-frequency questionnaire (FFQ), including information on vitamin and mineral intakes. Brand information was used to calculate selenium intake from multivitamins.

During a median follow-up of 8.9 years the team documented 965 deaths, 226 (23.4%) because of prostate cancer and 267 (27.7%) from cardiovascular disease. In multivariable analyses, men who consumed 1–24 µg/day of supplemental selenium had an 18% increased risk of mortality from prostate cancer compared to non-users, those taking 25–139 µg/day had a 33% increased risk and those on 140 µg or more per day had a 2.60-fold greater risk (P trend = 0.001). There was no statistically significant association between selenium supplement use and biochemical recurrence, cardiovascular disease mortality, or overall mortality. “These data underscore the potentially complex and variable role that lifestyle factors may play in the long etiologic time course of some cancers, in particular that risk factors for incidence may be very different than those for mortality,” write the authors.

Such results, they add, may not be generalisable to all populations, because selenium status differs widely across the world because of soil content and selenium supplementation behaviour. In the US men consume on average 134 µg/day, while in Europe they consume an average of 40 µg. The recommended daily dose is 50 µg.

In an accompanying commentary Theodore Brasky and Alan Kristal, from Ohio State University College of Medicine, write, “Urologists should query their patients about use of selenium supplements and recommend avoiding any supplement containing more than the US recommended dietary allowance of 55 µg/d.”

Statins have no effect on mortality in colorectal cancer

Statin use was not associated with reduced mortality among patients with colorectal cancer, a prospective German population based cohort study has found.

In addition to lowering cholesterol, statins are thought to have pleiotropic effects which may contribute to cancer prevention and influence apoptotic, angiogenic, proliferative, and inflammatory processes. While studies have found an association between statin use and moderate reductions in mortality among patients with colorectal cancer, such studies have lacked adjustment for some potentially relevant confounders, such as stage of disease.

For the current study, Michael Hoffmeister and colleagues, from the German Cancer Research Centre, Heidelberg, undertook face to face interviews with 2,697 patients from southern Germany diagnosed with colorectal cancer between 2003 and 2009. Information was gathered on statin use, therapy details and recurrence, and data on vital status and date of death were obtained from population registries. Overall information about molecular pathological subtypes of colorectal cancer was available for 1,209 patients. Cox proportional hazard regression models were used to estimate adjusted hazard ratios (HRs).

After a median follow-up of 3.4 years, a multivariable analysis adjusting for major clinical and epidemiological factors found use of statins was not associated with overall survival (HR=1.10, 95%CI 0.85–1.41), colorectal cancer-specific survival (HR=1.11, 95%CI 0.82–1.50), and recurrence-free survival (HR=0.90, 95%CI 0.63–1.27), respectively. However, an association between statin use and recurrence-free survival was found for early-stage carcinomas (stage I+II: HR=0.50, 95%CI 0.26–0.95). Analyses stratified by molecular subtypes of colorectal cancer suggested no association of statins and overall survival among patients with the more common tumour subtypes including microsatellite stable tumours, CIMP-low/-negative tumours, tumours with negative or moderate expression of ER-beta, KRAS–wild-type and KRAS-mutated tumours.

“The results of the present study do not support suggestions of beneficial effects of statins for CRC [colorectal cancer] prognosis derived from registry-based studies and suggest that such effects reported in previous studies might partly reflect the lack of or incomplete control for stage at diagnosis and other factors associated with the use of statins such as better medical surveillance,” write the authors, adding that, to their knowledge, the study is the first to report associations of statin use and survival by pathological subtype.

The findings of better recurrence-free survival associated with use of statins among early-stage patients, they add, may be due to chance and need confirmation.

Male breast cancer is not congruent with the female disease 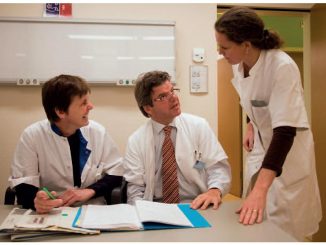 Emiel Rutgers: a surgeon for the genomic era