Being alert to early signs of cancer gives the best chance of survival. Silja Paavle, reporter on the Estonian daily Öhtuleht, helped to pass on this message with this article which won her a Best Cancer Reporter merit award.

One shouldn’t walk through life with one’s eyes closed and, when you hear about terrible things, think that they cannot happen to you. Even the most terrible things happen somewhere. You simply have to learn to live with them.” So says the mother of a girl who has been diagnosed twice with a brain tumour.

Karin, the mother of the eight-year-old Karmen (the names have been changed), admits that, somewhere in her subconscious, the awareness of a brain tumour ticks away like a timebomb. When the time approaches to call the doctor for an appointment, she gets very nervous. Her family certainly don’t miss the nerve-wracking days they went through during the treatment of their little girl’s twice-diagnosed brain tumour.

Karmen was an ordinary, lively little girl from Tallinn who could walk and talk by the time she was around a year old. She was not prone to illness until one morning, when she had a seizure. “We went straight to the hospital, where she was given treatment and examined. A head scan showed that she had a brain tumour. According to the initial assessment, it was the size of a baseball.” This is how Karin describes the news, which came as a major shock to the girl’s parents. “I cried for days,” she admits.

The doctors’ hopes that the tumour was benign was some consolation – malignant tumours usually announce themselves beforehand through some ailment or general poor health.

Having gone to the hospital due to a seizure, Karmen was not allowed to go home. A week later, she underwent brain surgery, and afterwards the doctor told the girl’s mother that the tumour was suspicious. “I was terribly shocked – how can anyone say something like this to a mother until they are absolutely certain? But I suppose doctors have experience,” sighs Karin. It did give her time to get used to the bad news – the tumour was larger than the doctors had at first thought, and it turned out to be malignant as well.

When Karmen’s doctor, Karin Orgulas, informed her, Karin decided it was time to fight and move on. “I understood that it was not the worst type of brain tumour, but it could grow extremely fast,” she says.

The child received chemotherapy and, fortunately, coped well. This was a difficult time for the whole family: Karin had just started a job, but now she had to take her daughter to the doctor every 10 days. During the day, when Karin was at work, Karmen’s grandmother stayed in hospital with her. In the evenings and at nights, Karin took over.

Karmen would only eat food prepared by her grandmother, which she cooked after returning home from the hospital. “If my mother had not helped us, it would have been extremely difficult,” says Karin gratefully.

The first period of treatment lasted a year, after which Karmen, as with all cancer patients, remained under observation; she had to be examined every three months. When the family returned for her head scan, several unfortunate incidents occurred – one time the machine was out of order, another time the doctor was on holiday.

When the procedure was finally carried out, it became evident that the malignant tumour had returned to the three-year-old’s brain.

“I was horrified to think what might have happened if we had succeeded in getting the scan at the first attempt. Since the tumour grew very fast, it might have gone unnoticed the first time, and early discovery is essential for success,” says Karin.

This time the doctors considered surgery too dangerous, so radiation and chemotherapy had to be used to fight the tumour. First, Karmen received 30 sessions of radiotherapy.

“In five weeks, she was under anaesthesia 30 times in all. During radiotherapy, she had to lie completely still and flat on her stomach under a machine – without a full anaesthetic. This is difficult for small children,” says her mother.

“During radiotherapy, she had to lie completely still and flat on her stomach. This is difficult for small children”

There were times when the whole family was at the hospital – Karmen’s little brother suffered from laryngitis, and it was not rare for the mother to be in the oncology ward with their daughter, while the father was in the infectious diseases ward a few floors below with their son.

Karmen experienced no serious side-effects from chemo- and radiotherapy, though Karin spits three times over her shoulder for luck when she says so. “She coped with the treatment very well.”

Between each period of treatment, Karmen had to be taken to hospital for blood tests. During breaks between the chemotherapy sessions, the family had to visit the hospital a couple of times – Karmen suffered terribly from vomiting.

Due to the hormone treatment accompanying radiotherapy, Karmen’s appetite and weight increased. “This was awful – in the end, she even had difficulty walking. A child that young cannot understand why she is not allowed to eat. She only feels hungry and cries about it,” sighs Karin, adding that they no longer have problems with excess weight.

Karmen is now eight years old and there is nothing to show that she has suffered a serious illness. She takes her disease with childlike levity and knows that, however bad it is, doctors can help.

Karmen now has to have a brain scan at regular intervals; she also has to be injected with growth hormones, as the radiotherapy interfered with her growth. “At first, we feared that growth hormones would make the cancer grow again, but the endocrinologist reassured us, telling us that the body usually produces its own growth hormones and therefore they will not cause the tumour to grow back,” says the mother.

Karmen must also avoid being hit on the head; having lost her hair during chemotherapy, she is used to wearing a hat.

Karin remembers that when the four-year-old Karmen lost all her hair and was unusually chubby due to hormone therapy, people would often stare at her. “Once Karmen shouted at a grown-up: what are you staring at? Never seen anyone like me before?” she laughs.

Karin says that, although Karmen’s difficult disease, which took up so much of their energy, did put a strain on relationships within the family, they coped relatively well. Throughout the course of treatment Karmen was utterly positive and responded well. “However, there were several children with cancer at the hospital who never recovered. Each of these stories was very sad,” sighs Karin.

“Once Karmen shouted at a grown-up: What are you staring at? Never seen anyone like me before?”

Whenever she heard sad news, she told herself that every tumour is different and each child’s disease is different.

Karin is very grateful to her GP as well as to the doctors and nurses at the Children’s Hospital, who are highly committed to their work and answer all the parents’ questions, in spite of the difficulties.

When things get tough, they are always there for their patients – even at night.

This article was first published in Öhtuleht, on 31 August 2010, under the title ‘The mother of a girl suffering from a brain tumour: awareness of cancer ticks away like a time-bomb’. It is reprinted here with permission. © SL Öhtuleht AS 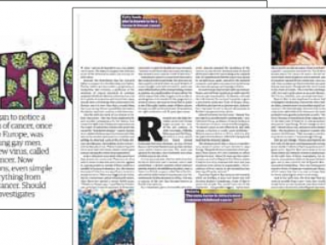 Our role in moulding the image of cancer