Mammograms are unlikely to benefit older women with increased comorbidity, as they would probably die from something else before they could develop breast cancer. That is what results from a new study on more than 220,000 women, published in JNCI.

“Our findings shed light on what age may be the best stopping point for mammography. If you have chronic illnesses after age 75, our findings do not support continuing mammograms”, said senior author Dejana Braithwaite, Associate Professor of Epidemiology and Oncology at Georgetown Lombardi Comprehensive Cancer Center, Washington.

The sample included 222,088 women aged 66-94 who underwent screening between 1999 and 2010 in one of the five mammography registries participating in the Medicare-linked Breast Cancer Surveillance Consortium database. Of those, 7,583 women were diagnosed with invasive breast cancer and 1,742 with ductal carcinoma in situ (DCIS), and over the 10 years period, 471 women died from breast cancer and 42,229 died from other causes. The 10-year cumulative incidence of invasive breast cancer did not change with increasing in comorbidities (measured by the Charlson Comorbidity Index, CCI) but decreased slightly with age. On the other hand, the cumulative incidence of breast cancer death was very small and did not vary by age, accounting for just 0.2-0.3%: more specifically, it increased from 0.24% in women aged 66-74 to 0.29% in those aged 75-84 through to 0.31% in those aged 85- 94. On the contrary, other causes of death increased with increasing CCI and age.

“This study examined who is not likely to benefit from screening mammography after 75 years of age,” said co-author, Karla Kerlikowske, Professor of Medicine at University of California in San Francisco. “We hope that future research efforts can build on our evidence and inform discussions about optimal screening strategies for older women”.

Currently guidelines vary in their recommendations about upper age limits for screening cessation: for example, the United States Preventive Services Task Force states that there is not enough evidence to recommend for or against screening women age 75 or older, while the American Cancer Society recommends stopping screening when life expectancy is less than 10 years.

In Europe, most programs stop screening women between the ages of 69 and 74. “Our research underscores the need to individualize screening decisions among older women”, said first author Joshua Demb, University of California San Diego. “To that end, we hope that our analyses contribute to developing effective tools that older women can use in consultation with their health care providers to decide a screening strategy that is best for them”. 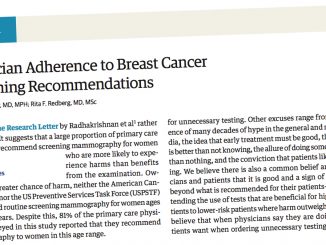